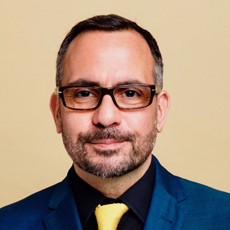 A food writer, Photographer, and TV presenter, Host of Eater’s The Meat show. 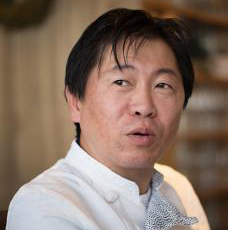 One of the best world’s 1,000 chefs in “Terra Madre 2006” hosted by Italian Slow Food International.

Wagyu translates to “Japanese cow” and refers to one of four breeds that includes brown (sometimes referred to as red) and black hided animals, as well as a polled (hornless) and horned cattle. The breeds are renowned for their high degree of intramuscular fat (the fat found within muscle, referred to as marbling), elaborate rearing procedures, high price, and exquisite taste.

Through selective breeding Wagyu cattle have been developed to exhibit specific traits. Most obvious amongst these traits is the high degree of marbling the meat exhibits. But the nature of the fat itself is also important. The fat from the various Wagyu breeds has a very low melting point — it literally melts in your mouth, giving it a unique taste and texture. The fat, known as “sashi” in Japan, is also distinct from American beef in that it is primarily monounsaturated, making it healthier due to being lower in cholesterol, with traits similar to olive oil.

Japanese beef is graded for quality in a way similar to the way that US domestic beef is categorized by the US Department of Agriculture (USDA). But while consumers in the US see beef broken down into three main classes — Prime, Select, and Choice based primarily on marbling — Japanese beef is graded using a far more complex system. This involves a matrix that assigns a letter grade for yield, with A being the highest of three classes; as well as a numeric quality grade that takes in account factors like marbling, color and brightness of flesh, the color, luster and quality of the fat, and overall firmness and texture; with each category assigned a score from one to five, the latter being considered the highest grade.

Within the marbling score, also know as the beef marbling standard (BMS), there is a further breakdown with 12 grades that describe the amount of intramuscular fat. Under this system A5 is the highest grade of beef attainable, but even within this grade there is the further distinction of the BMS, which in this class ranges from eight to 12 points, with the latter being the most marbled.

Its not just the grading system that is more comprehensive and complex. There is a collectivism and a shared sense of responsibility of elevating the Wagyu breeds that is quite unique to Japan. It is not just breeders and meat packers that are vociferous advocates for Wagyu, as one would expect, but governmental bodies on both the regional and national levels that also help to promote and improve the breed.

This is most apparent at the Wagyu Olympics, an event that brings together breeders, farmers, and related industries from all of Japan’s prefectures who display their interpretations of Wagyu and provide a qualitative improvement to the breeds genetics. The cattle are judged for various traits such as size, coat quality, marbling, muscle conformity, color of meat etc. The event is held in Japan every five years, and the 11th annual competition was held in September 2017 in Sendai.

Competition is perhaps the wrong word for the event, festival or exposition is probably a more accurate description. While there is certainly a competitive components — including auctions and the judging of both livestock and carcasses — the exposition is intended to elevate the breed in total, and reveal new techniques and methods to improve Wagyu. Inspiration can thus come from any of the prefectures represented, not just the largest producers. A case in point is the award given to the representatives from the prefecture of Kagawa, Japan’s smallest but one with a rich culinary tradition. Although best know as the birthplace of Sanuki udon, the prefecture is also the first place to successfully cultivate olives in Japan.

The olive industry has informed cattle production in Kagawa and several years ago farmers began experimenting with “finishing” Wagyu cattle on olives to fatten them for market. The technique is both unique and unorthodox, but against all odds the Sanuki olive fed Wagyu entered by the team from Kagawa was awarded a special prize for quality of fat. While finishing cattle olives is unique to Kagawa, the success of the process means that you shouldn't be surprised to see it widely adopted in the future.

Nick Solares is a food writer, photographer, and TV presenter renowned for his expertise in meat and restaurant culture. As a pioneering food blogger he worked at Serious Eats (2007 - 2014) as a reviewer and at Eater New York as restaurant editor (2014. - 2017) In 2016 Nick began hosting The Meat Show (TMS) for Eater Video. The show is completely literal — it follows Nick’s exploration of meat culture across the US and the world. With millions of monthly views across YouTube, Facebook and http://eater.com TMS has amassed a devoted following. TMS received NY Emmy nominations in both 2016 and 2017.

”Take for example the olive-fed beef. I had heard about it but had never tasted it myself. However, as I was searching for Setonaikai-specific ingredients, I happened to find this olive-fed beef and it changed everything.” Okuda said.

Olive beef is a premium brand of beef that has been produced in Shodoshima, Kagawa since 2010. Shodoshima is renowned for its olive production. The oil is pressed in the fall and made into olive oil. The cattle raised in the region are branded as "Olive-fed Beef" since they are fed dried olive fruit. Chef Okuda had the opportunity to taste olive beef for the first time in winter of 2016 at the one of his restaurant, YAMAGATA Sandandero in Ginza Tokyo, where he tried various parts of the red meat such as round, rump, chuck, and sirloin. 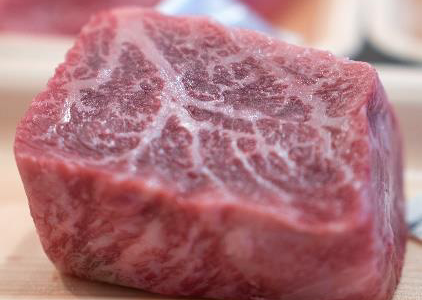 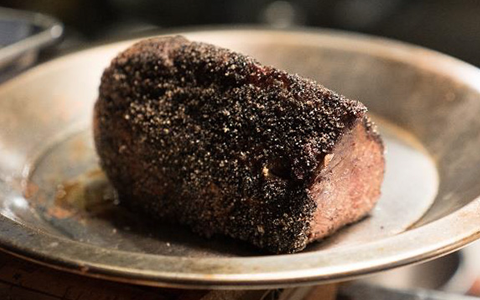 "There are many places in Japan that serve nice marbled beef. Yet, I had not encountered marbled beef that was just perfect. What's nice about olive beef is that it's light fat in and doesn't have a strong aftertaste. I've decided to use healthier parts of red meat, namely round and rump, in my Miyajima restaurant. "

After tasting the beef, he ordered Olive-fed beef for his restaurant. He also has a great knowledge of olive oil. He tried to get olive oil as well from Shodoshima. Then, he tried to make some dishes to see if the combination of Olive-fed beef and local olive oil was good. Some of the dishes are as follows. 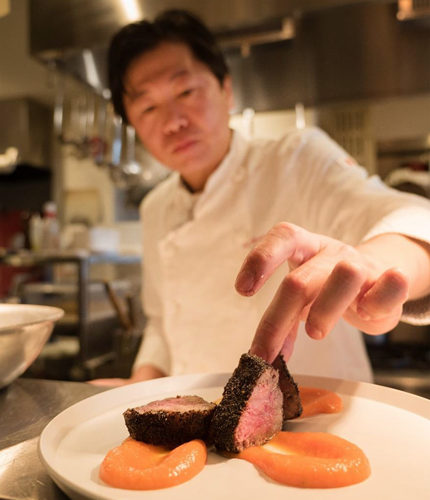 Thinly-sliced round of Olive-fed beef is blanched in shabushabu style, then put on a vegetable salad. The grissini, deep-fried with olive oil, is topped on the salad. The healthy and refreshing taste can be enjoyed by cooking the Olive-beef in shabushabu style featuring meat which is not oily. "You can enjoy the flavor of the cutlet by tasting beef with grissini at the same time," said Okuda. 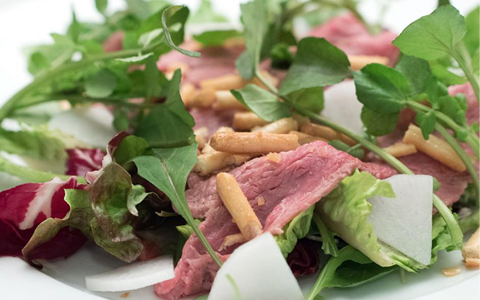 Antipast of broiled round meat in trofie style 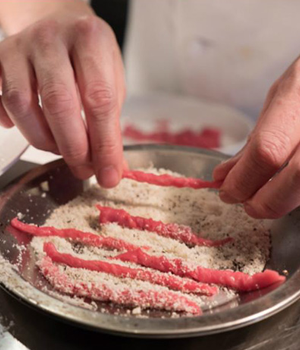 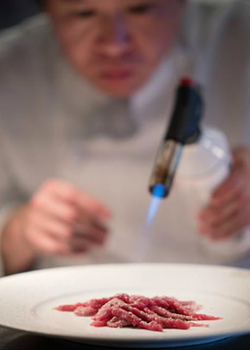 Born in Tsuruoka City, Yamagata-Prefecture. In 2000, Chef Okuda opened "Al-ché-cciano" in his hometown, where his dishes use seasonal food and wines produced locally. In 2006, he was selected as one of the best world's 1,000 chefs in "Terra Madre 2006" hosted by Italian Slow Food International (11 Japanese was selected). In 2009, he opened "YAMAGATA San-Dan-Delo" at Ginza, Tokyo. In 2012, he was named as a "Peace Ambassador for Food" by the Republic of San Marino. He also served as a cuisine supervisor for "Japan Night 2012" at the Davos Meeting held in Switzerland in the same year.

The tender texture of the red meat of Olive-fed beef impressed me. The fact that it's not oily and the flavor of parmesan cheese went well together. The marriage made him smile. "I think the texture is unique and tasty," said Okuda. 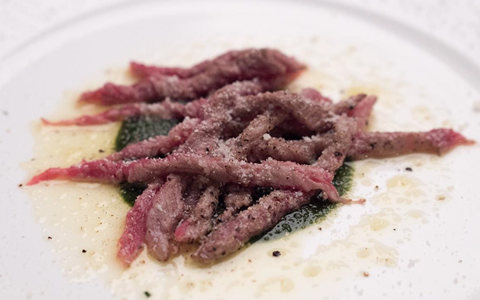 Born in Tsuruoka City, Yamagata-Prefecture. In 2000, Chef Okuda opened "Al-ché-cciano" in his hometown, where his dishes use seasonal food and wines produced locally. In 2006, he was selected as one of the best world's 1,000 chefs in "Terra Madre 2006" hosted by Italian Slow Food International (11 Japanese was selected). In 2009, he opened "YAMAGATA San-Dan-Delo" at Ginza, Tokyo. In 2012, he was named as a "Peace Ambassador for Food" by the Republic of San Marino. He also served as a cuisine supervisor for "Japan Night 2012" at the Davos Meeting held in Switzerland in the same year.